First off, an important note:
There has been some discussion on replacing the train.dat / extensions.cfg setup with an improved variant (I intend to use XML, but all of the specifics haven't been hammered out yet)
This implementation is based upon the existing formats as somewhat of a 'stopgap' measure, and proof of concept

Build your bogie object, with 0,0,0 as the point around which you wish it to pivot.

Bogies may be added in the extensions.cfg file as follows:

For this, N is the zero-based index of the bogie you wish to add.
For example:

Bogies are attached at the location set for the axles of each car.

I presume this retains the facility with the routefile .stop instruction to specify multiple working stopping points dependent on train length?

(note):
Some time ago, a previous (ingenious, but flawed) attempt at providing better representation of bogie behaviour was hampered by the unfortunate fact that the car stops were unworkable because each bogie was actually modelled as a 'car'. Meaning a loco and six cars appeared to be 21 cars as far as the program was concerned, so car counting was meaningless in terms of train length.

(note):
Some time ago, a previous (ingenious, but flawed) attempt at providing better representation of bogie behaviour was hampered by the unfortunate fact that the car stops were unworkable because each bogie was actually modelled as a 'car'. Meaning a loco and six cars appeared to be 21 cars as far as the program was concerned, so car counting was meaningless in terms of train length.

Absolutely.
This 'solution' does not alter the train length in any way.
Bogies are also not counted as collision objects (That makes no sense.....)

There are several ways to implement moving bogies with the official builds, but at their root, they all rely on the same bug with the physics engine. A small technical explanation:
openBVE's collision detction is very basic, and strictly linear.
Look at the following image:

As you can see, we have two cars.

A 'standard' collision model would check if any part of the cars overlap: In the following image, the section colored blue is overlapping, and hence a collision has occured.

openBVE on the other hand, only checks for collision between the two ends (Colored red).

This means that we can use any number of methods (Objects built in the negative, use of couplers etc.) in order to 'move' the cars to be in a different order on load.
So long as our two ends do not collide, the bogies move as intended.

Edit:
Final point-
This 'bug' will not be fixed for trains using the train.dat / extensions.cfg format. There are too many trains built already which rely on it, and I wish to keep backwards compatibility unless absolutely avoidable.

If (when) the replacement format is completed, this bug will be fixed for trains using that format, so *please* do not rely upon it for any new construction going forwards.
If you're using this 'bug' to do anything else, please post and I'll see what can be done to provide an official way of doing so.

The openBVE-type collision model may allow simulating articulated bogies by setting a bogie's location to be beyond the length of a car.

Removing this workaround and providing an alternative solution might mean quite a bit of factoring in the code.

That's why, as I see it, Chris explicitely stated he won't be changing the behaviour for the legacy format.

Quork: was responding to the following:

"If you're using this 'bug' to do anything else, please post and I'll see what can be done to provide an official way of doing so."

I don't think articulated bogies should be particularly difficult other than in terms of configuring them (The basic maths is relatively easy- All it really requires is another pair of track followers and another rotation matrix), but let me think about it for a bit before I give you a definitive answer as to whether a solution can be added.

A currently working example would be nice if you have one I can play with- It's much easier to visualise when you have an example that already works in your intended way.

Long time no see and look what's happening. :-) I will definitely give this a shot for my trains. :-)

Ooooh great news! I will definitely test that soon

should find some train to "chop" for it though...

Nice to see this in the update, when the bogies concept came along for the APT myself and Alan were limited in terms of what BVE allowed and didn't allow . At least this way the whole 3 cars rather than 1 can be fixed, at the time it was an easy enough short term fix of dividing the total weight by 3 for all cars and bogies so the trains weight didn't alter, but developers weren't too keen on the idea!

Chris,
sorry for being a bit thick here, but I am wondering why there are two axles per bogie? Also, do we remove the Axles from the [car] section then? If I put it as follows, it does not work... both the car and the actual bogies are centered along 0 on the Z axis. The bogies show up in an incorrect position.

Thank you for reply!

Because bogies can be quite long. Take a tram, if the bogie model didn't have two axles, this would show *very* much on small radius tram line curves.

Right, but how to represent one axle only? Do we omit one value then?

Why would you add a bogie if there's just a single axle? *confused* (which might, to be fair, just as well be related to my Caipirinha and Mojito)

Class 854. :-) (Yeah, I know it does not make sense, it was for testing purposes)
Anyway, I am guessing it does not make any difference to the bogies being displayed incorrectly... I now do get why two numbers (I was just being useless tonight

), but I don't get why the bogie is not displayed correctly.

Some observations:
A bogie requires two axles, in order to calculate correctly it's rotation.
Bogies and cars aren't attached to tracks as-such, but rather require two points of reference to rotate them

The [Axles] section is required for the main car:
The sim places each bogie with it's center at the axle position.

I'm not sure off the top of my head why the bogie position is wrong- I need more data to go on.
Adding a bogie from the Western to your 754 works OK, which makes me suspect that your bogie objects aren't correctly centered, but that's only a guess.....

(Post the bogie object. Mesh only with no wheels or textures is fine)

Thanks, Chris, I think I have figured it out with the axles. However, the bogies do still show incorrectly, I must be doing something wrong. I will try to post the code later today, when I get home.

Other than that, your bogies appear to work OK on this end.

Will check if it's generating an error message, but I think it should be.....

Right, it is... but I was trying with different values (a pair of a positive and a negative one) and it had no effect at all. Same position, same result... I think I am using the build from the 14th May... not at my PC, though, so don't take my word for it.

I don't think the route could be the problem here, right?

Shouldn't be- I've tried with a few routes including First Brno Track and all appears OK.
I've fixed a couple of bugs with bogies since then, but they were both edge-cases (Front bogie declared, but no rear bogie, and bogies getting stuck on bufferstops)

Will do a little more digging, but can you give me a quick screenshot of what you're seeing please?

If you get today's build, I've also just added a bug report dialog. (Link at the bottom left of the main form)
You can access the previous log and crash log by clicking on the buttons here, and it's also got a function to create a zip file on your desktop containing the most recent simulation log and crash log (If applicable) plus the package database.

I don't think there's going to be anything useful in these, but it might help people in future.

Will try to post it later today, I am not at my PC at the moment.

So, with the settings above, I get the following... 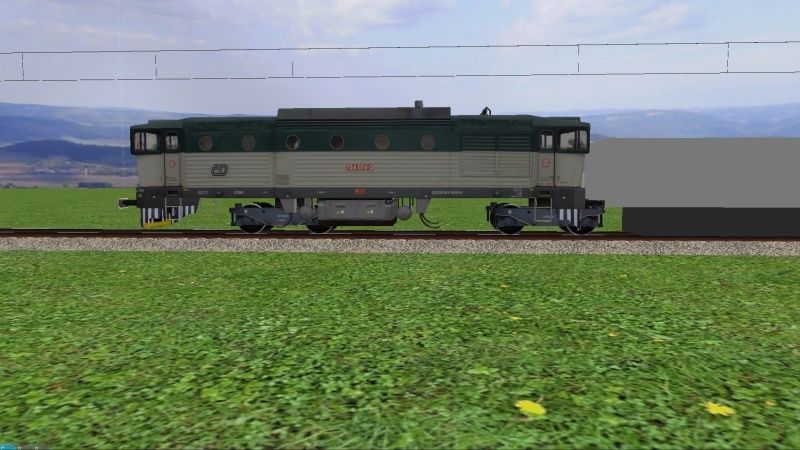 Weird, looks as you'd expect it to behave if it were constructed in the positive instead of around 0.0 - but as we see in your source code, it isn't. What would be interesting, what do they pivot around now?

Similar topics
» How to set a train with 3 animated bogie?
» Does Motion Blur affect performance on OpenBVE?