Fixed as soon as it builds the newest version

Technical diagnosis:
When disposing of a train, all associated objects must be hidden by the renderer.
I'd forgotten to check whether any bogie objects were defined, and hence was trying to dispose of non-existent objects.

I'm actually surprised no-one else found this one, first

Wonderful! Program works again! Thank you so much for your dedication!!!

Really looking forward to the implementation of the upcoming features you guys have outlined!

Using the latest build the close message appears when I only press F4 as well as the ALT + F4. As a result I can't use the F4 camera as the quit message comes up instead.

Interesting, that would appear to be an openTK bug, as checking the flag bitwise ought to work

(The documentation states it's mildly faster, and I was only trying to catch the left ALT key, as opposed to both)

Have fixed by switching to the 'other' method, new build should now be up.

One other rather obscure fix from this afternoon:

This affects some BVE2 era routes, for example this:
http://uffaeriuffa.altervista.org/av/avindice.htm

Using the new build it works properly with the close message only if I press ALT +F4 and the camera when F4 is used.

I've just had a chance to test your April 21 build on Ubuntu 16.04 and I can say it's a decent improvement. Window resizing while playing works correctly and the startscreen disappears when loading a route. I ran two route files, they seem to work fine.

1. On the Customize controls page the keys for the controls don't appear when a control is clicked on the list (though they work). 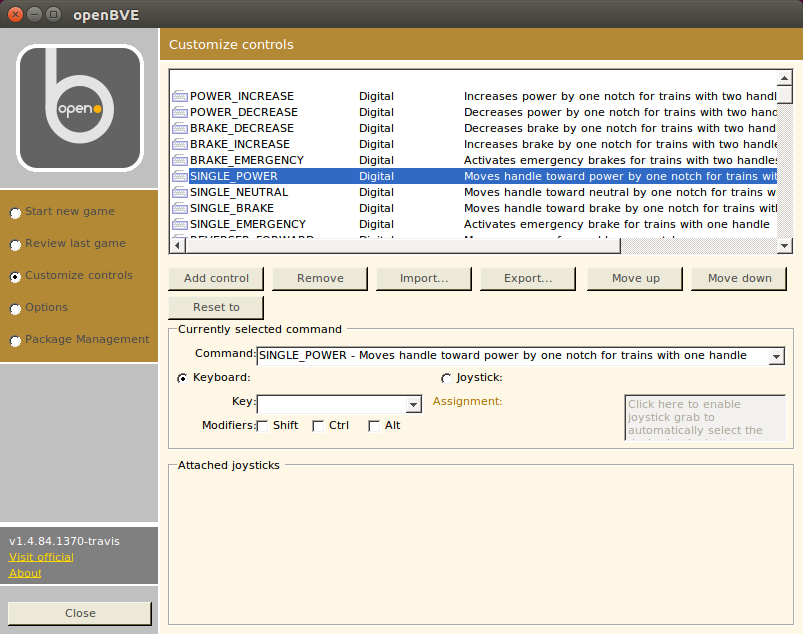 2. On the Options page there are some minor visual glitches. 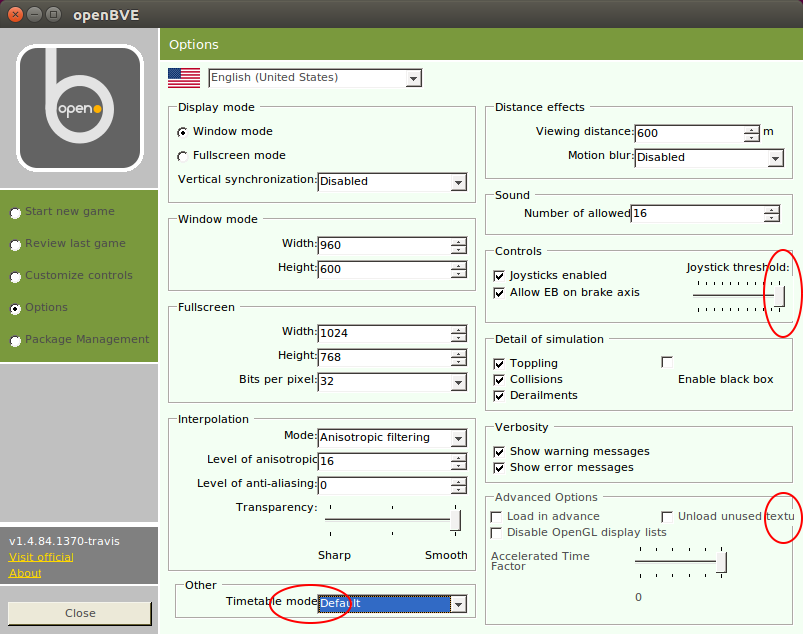 (I forgot to circle Number of allowed sounds here.)

Thanks for all your work, Chris!

What happened to the layout? That's totally weird, completely different from what it looks like for me. Has it always been so on Linux?!

Will take a proper look tonight- Looks like text padding/ anchoring issues on all of them except the missing control key display. (That's going to be the translation tweaks I made)
Must have got an anchor value wrong somewhere- If you resize the window slightly I think they'll all stay in place, whilst they should dynamically adjust to fit.

Should be easy enough to fix, as I think they'll be broken on any Mono system

Final note- The most recent build (May 30 IIRC) changes the radio-buttons on the left to buttons to be consistent with Windows. I think these should work 100% but I did have to fiddle with some color changing glitches....

This is what I see with a fullscreen window: 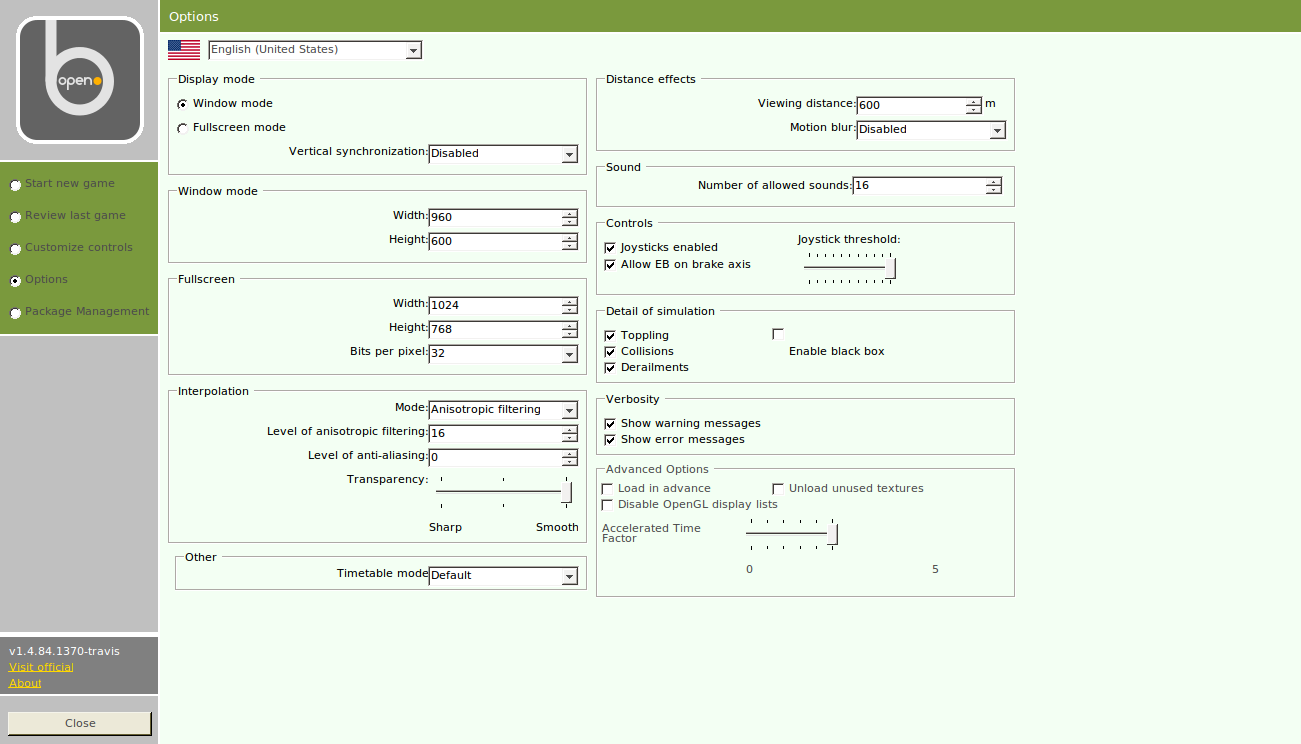 May 30? Isn't the one at the top here: http://vps.bvecornwall.co.uk/OpenBVE/Builds/ the latest build, or do I look somewhere else for new builds?

The build doesn't seem to have auto-uploaded either, will kick it when I'm home from work.....
(That's what comes of posting from the phone)

Should now have a 1st of May build up there.
Fixes relevant to your post:

The others are the fault of the default font Mono is choosing. The character kerning (size) seems to be different to the default on Windows, and so the string measurements are wrong. I need to see if I can fix this without breaking the UI spacing somewhere else.....
I'm fiddling around with it, and will see if I can make things better.

Just tried the May 1 version on Windows 10 in a brand new folder and saw that anti-aliasing was by default at level 0. I guess it should be at maximum by default.

Some placement issues are still present in this build (not that they are the most important thing): 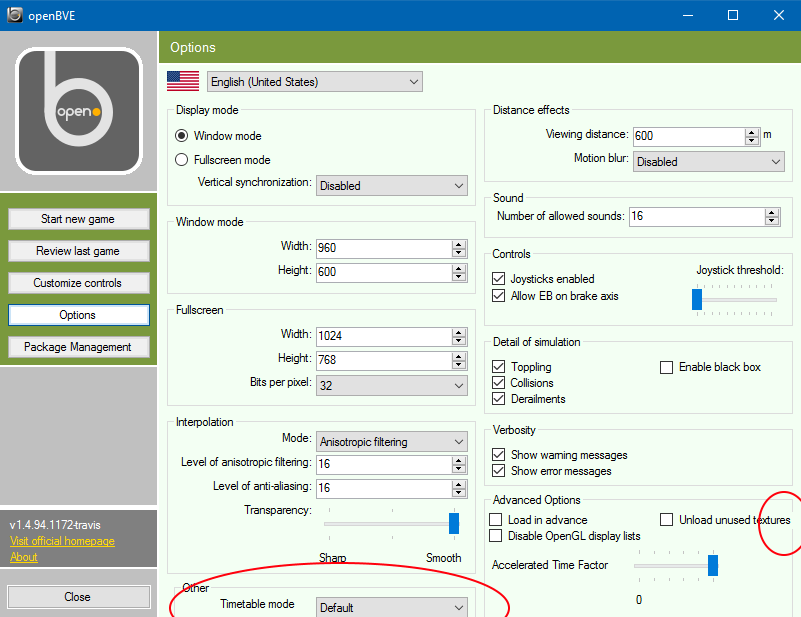 The only really obvious thing I can see is that the form might be cutting off the bottom of the dropdown box?
Or are you referring to the fact it's not quite perfectly aligned?
Just want to make sure I'm looking at the same thing you are

Yes, the missing part of the dropdown is one thing.

The other is the placement of the phrase Timetable mode, it's not aligned in front of the dropdown like other options are above it, for example Transparency, Level of anti-aliasing, Level of anisotropic filtering, etc.

The third thing is that all other options have a colon at the end but Timetable mode doesn't.

Maybe the window should be slightly larger to give more room to all these. Again, this is not the most important thing, I just saw it and thought I'd let you know, but work on actual features is more important.

Fixing little cosmetic issues is therapeutic, and it really helps with making this look a little more professional

(Don't try getting a file/ folder picker dialog to work reliably on both Windows and Mono, it's a nightmare.....)

Will sort the aligment and cutoff now we're both looking at the same thing.
The missing colon isn't in the language files, hadn't noticed that. Will change.

Probably ought to resize the window a little, but the mad thing is that it's perfect on Windows (The kerning issue....)
You might also have noticed that depending on the window size the ansiotropic text can get cut off, and I need to see if I can get a workaround in place properly.
Again, this is all Mono specific issues......

I have given some thought to the usability of the program after having to explain to multiple people how to install and use openBVE.
One of the main issues that most laypeople run in to when trying to install openBVE is dealing with installing the program.

Perhaps an online installer can be created.
Such an installer would be downloaded by the user.

Upon launch, the installer will fetch from an online server (I would assume this would be leezer's site) the newest stable or development build of openBVE (user's choice as to which version to install) and install it in the proper directory.

I figure this would go well alongside the content manager feature, which itself will significantly reduce the learning curve of the program.

All dependencies are included in all current nightly builds, and will be prompted for automatically if required

When we have a completely stable version, I will also build an installer- That's very much on my list, and isnt hard. (Another foible of Michelle...)

Packages are now fundamentally most of the way there, but I've hardly started on trying to work out all the problems.

leezer3 wrote:All dependencies are included in all current nightly builds, and will be prompted for automatically if required

When we have a completely stable version, I will also build an installer- That's very much on my list, and isnt hard. (Another foible of Michelle...)

Packages are now fundamentally most of the way there, but I've hardly started on trying to work out all the problems.

That is wonderful news! I am so glad that the program will transition to being much more user-friendly. Thank you so much for all of your contributions!

What constitutes a "stable" version, out of curiosity? I'd assume that no stable version will be released until packages are fully implemented and there has been a round for Beta testing to zap any bugs?

Also great news is what you wrote in Dex's First Brno Track thread: OpenBVE recognising static formulae as such and thus not reevaluating them every frame is really a big step forward.

Today's build contains a change which provides a considerable speed-up with certain configurations of animated objects,

If your animated object contains a static function result, e.g:

Rotation and Translation functions with a static result are now applied once upon object load instead of being checked each frame.

This provides a FPS boost of ~50% in some areas on the previous version of First Brno Track, but this is an edge case, and the actual gains will depend heavily upon the number of animated objects in use, and whether any static function results are used.

Quork wrote:Also great news is what you wrote in Dex's First Brno Track thread: OpenBVE recognising static formulae as such and thus not reevaluating them every frame is really a big step forward.

Posted at the same time as me

First Brno Track is very much an edge case, and this isn't nearly as good as it looks

All I'm actually doing just at the moment is a simple check as to whether the entered function can be parsed into a number, and if so applying this directly to the object at load time.

NWM and the Plymouth Route (Two more major FPS killers) see minimal to no FPS gains depending on where you are in the route-
This will help with people who're using animated files as an object container, but will have absolutely no effect otherwise.

I'm thinking about how to check whether a nested function will always return the same result, but this is harder than it looks

It seems as if a .DMG download for Mac was not generated for the most recent build.

Should now be there, dunno why Travis failed to find Mono, but worked just fine when the build was restarted

Apologies, if you've downloaded in the last hour or so, please do so again- The previous build included a typo where non-static rotation for the Z-axis would actually be applied on the Y-axis......
Both builds have now regenerated.

Another fix incoming for this change as soon as the build server regenerates.