I had a nice time at the Railfest on Saturday. The weather wasn't great, mostly overcast, with one really heavy shower, followed by a few bright and warm periods. There was plenty to see and the attendance was quite
large..... There was one pitch point that slowed things down o a crawl between the two sections.

My day was mostly spoiled by the train service, in both directions due to a divergence around Derby and the train seemed to stand in stations for quite long periods. The return journey was the worst. Departing York at 15.30 and not reaching Oxford until 20.40 just in time to miss a connection, with a further wait of 40 minutes for the 21.26 and not getting home until 21.50. Having been up since 05.00 it was a bit too long for the mileage involved.

The divergence was interesting in that I hadn't been around Long Eaton and up the ML mainline to Chesterfield via Totton in a long time. It was interesting seeing the many locos based at Totton and especially the long line of Class 60's. I had probably driven most of them at one time or another. It was nice to seeing that the triangle juncton at Pye Bridge was still there, which of course, is used by the Midland Railway Group at Butterly.

Just to show what the weather was like here is a photo I took from the Landing at the Transport Museum. Coming out of the gloom of the museum into the landing area I couldn't believe how the sky looked and decided to grab a shot. However, the Flying Scotsman train just left the station for Edinburgh so I managed to include that in the shot and it made for a nice contrast with the laden sky. 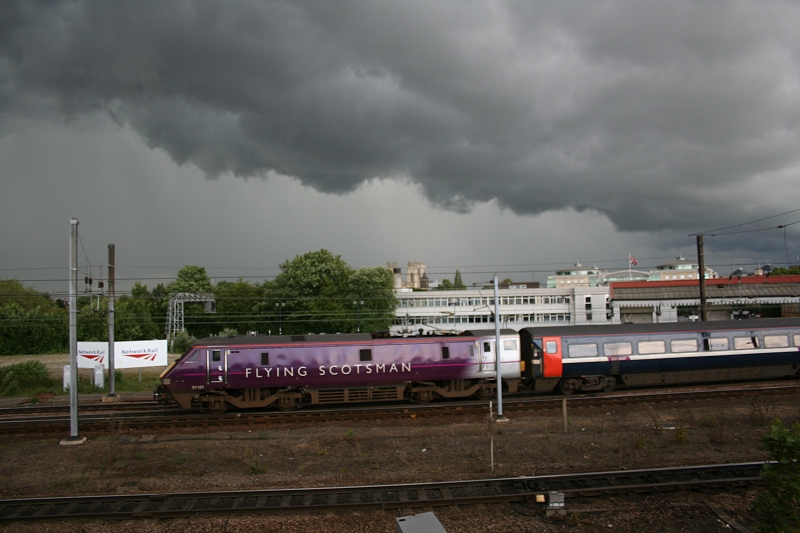 I took lot of photographs that will take a while to sort out but here is the link to the few video clips that I took throughout the day....

. I would have gone as well, since ive always wanted to visit a rail show, just not in a downpour.

Hope you had fun though.