my class 362 has been updated with a new cab and external. For more details and download visit my website. 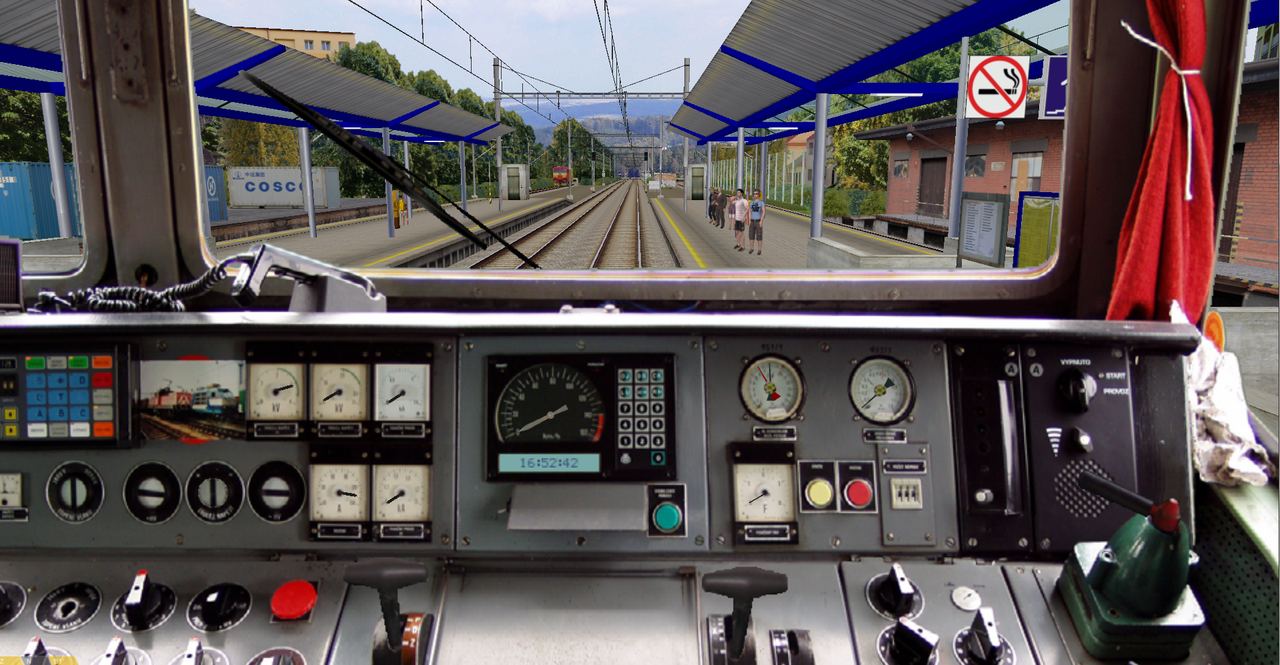 I like the curtain tied with string. And is that the spare underpants tucked in the gap by the brake handle?
In case of sudden red aspect . . . . .

Nice cab Derryck, it has a character and personality which a 3D cab doesn't provide.

graymac wrote:I like the curtain tied with string. And is that the spare underpants tucked in the gap by the brake handle?
In case of sudden red aspect . . . . .

LOL graymac this made my day!

It could also be a rag for cleaning the windows, cut from an old pair of fleecy pyjamas... but have it your way, it's funnier

Nice cab Derryck, it has a character and personality which a 3D cab doesn't provide.

Whew that's putting it mildly... what a beautiful piece of work, that looks like a nice place to be, well done indeed!

It is a piece of cloth to wipe the windscreen...

I thought that it was the flag of the CR...

Superb detail Derryck. Does it now at long last answer the question "2D or not 2D"?

busheyheath wrote:I thought that it was the flag of the CR...

No, it would have been more colorful.

As far as I know, this one serves to wipe the insect and other stuff that the wipers aren't able to deal with from the windscreen.

johnsinden wrote:Superb detail Derryck. Does it now at long last answer the question "2D or not 2D"?

Depends, John. For me, the 2D seems to be the right way to go. To be honest, I quite enjoyed making this 362 and even the 163 before. If I had a suitable photo of any ther cab, I might as well create a new one. And I would ddefinitely go for 2D once again.

Thank you all for nice words, it is good to know my work is being used and hopefully also appreciated.

Which one is updated? They both have the old date?

Sorry, forgot to save new date. It is corrected now.

Two new skins will be available soon (by the end of the week I hope), I had to obtain the LED lights photo first. As for now, their appearances in FullHD!

Looks good. How many different paint schemes do CR have for these locos? And are they all in use at the same time?

Looking good! Made by Skoda?

@ Busheyheath, you're right, they're made by Skoda
@ Derryck, thought you might like to know, if you "Google" the Class 362 your 2 photographs above appear as the 6th item on the list. Praise indeed........!

Right Ben, I have moved the posts into this topic. Now, to answer the questions...

@Johnsinden: I don't think so, that's why I originally put my posting in there, as a little comparison. True, it is a train driving simulator (BVE5), but have you ever seen a train that does not physically exist on the outside? I haven't. Are they? I will have to check it out.