Trouble with trams is where they have to share space with ordinary traffic and, of course, a tram can't steer out of the way.

Can someone please point another link or describe what's shown? There's people not being on Facebook. 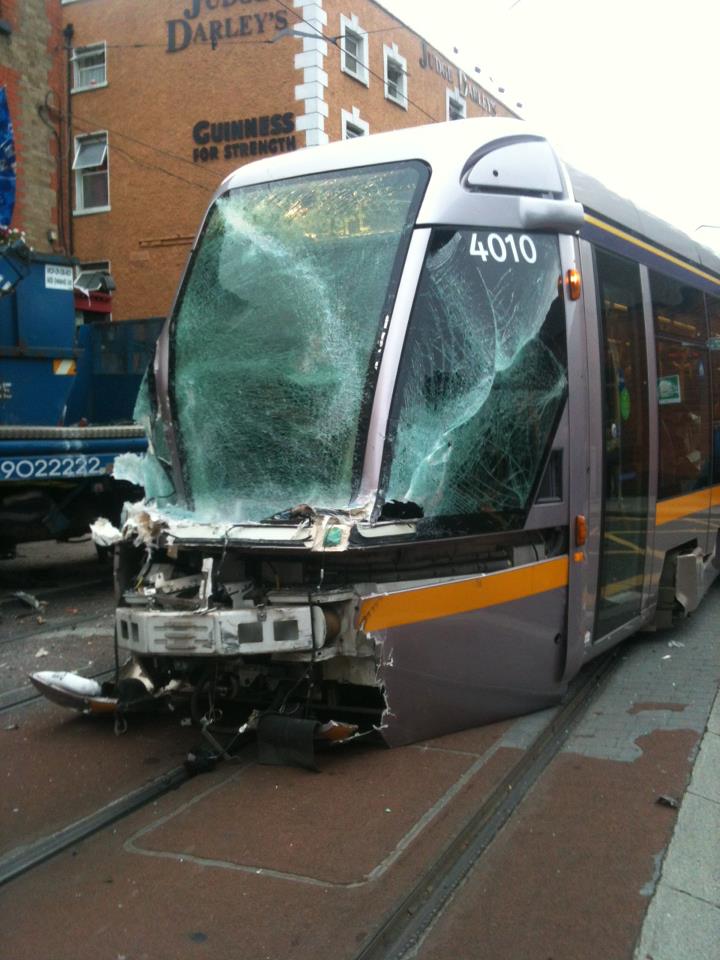 Looks like a nasty head on collision, two hospitalised

Perhaps future tram builders should take note of the advert on the wall above...!

I don't think so. The tram has shown virtually perfect crash behavior. People often, especially in rail fan circles, think the modern vehicles are worth nothing, getting crushed from seemingly nothing. Well; I don't know about you but I've witnessed a 3km/h crash of a single loco into a buffer stop for educational purposes. It's a shock not easy to catch without falling off anything you sit on; and that's when you exactly know that and when it will happen. And now keep in mind this is the maximum permissible speed for coupling. A crash with 10km/h would lead to deadly wounded already, if the train would stay hard. It has to fold up to softly brake the crash, decreasing acceleration for the passengers, thus increasing chances of survival. The same goes for any vehicle. The only exception is a tank; if it crashes into too solid a wall, the vehicle is virtually undamaged; the crew get's washed out with a high pressure water cleaner and the war can go on. Dunno about you, but I'd rather have my passengers and me survive than the, for all passion we have for it, dead tool around us.

Oh dear! I do apologise, it was only meant as a joke.

In 99% of the cases when I hear this sentence, it is meant dead serious, so I react as above. Often enough, there are self-acclaimed "experts" on rail transportation spreading their (wrong) speculations as the truth. Dunno why, but it seems the rail transportation fan scene attracts this kind of people very well.

Well spoken, how long have you been a driver for now quork?

I'm still learning, I'll finish during the next six months.

Speaking of tram collisions, this

Considering the scale of damage visible especially well on image 233 (mind that at least three bogeys got pushed out of the track by the impact resulting in a zig-zag, indicating enough impact energy for the vehicle frame to be overstressed) I wouldn't wonder if the unit gets scrapped. I don't know the shape of these trams and thus their horizontal plan, thus whether they aren't slightly oval in outline, but images 236 and 238 might show exactly the feared damage; a contorted vehicle frame. Let's hope a technical report will be published, would be interesting. But such things take their time.

Ooh! Eeehh! That must be real bad. Problem here is that the tram is on rails in the middle of a street. I hope the passengers were ok.

Two hospitalised at the time, one with fairly serious injuries