Adding reflectivity is, just like shadows, a biiig change to the engine (or rather, a change of engines probably). However there is one thing I imagine to be doable in a comparatively simple way with the engine we have today: A very simplified reflectivity for surfaces like rail heads and water surfaces.

This wouldn't allow for such things like spectacular shorelines with mountain reflections and such, but it'd be enough for small water bodies like puddles on platforms and, most of all, rail heads. Especially with low sun positions (dusk and dawn) the reflections are really spectacular in the real world and adding them to the sim would vastly improve the overall optics without actually changing that much. Optionally the "reflection" could be tilted according to the surface's angle so it fits even better in curves; depends on how hard it'd be on performance. It'd make a noticeable, but in most cases not dramatic difference.

I know of a way to do this via a “reflection” on a transparent section of windows down the side of a train, but this one moves an image at the speed set in code. And doesn’t “reflect” the scenery as such, but looks pretty nice!

Yeah, I know that one, but it doesn't help with this effect, which is *very* noticeable in cab view in RL: https://www.alamy.de/leere-gleise-bei-sonnenuntergang-image2086851.html

Quork wrote:Yeah, I know that one, but it doesn't help with this effect, which is *very* noticeable in cab view in RL: https://www.alamy.de/leere-gleise-bei-sonnenuntergang-image2086851.html

This one is possible. I got in my mind some concept.

The concept it's a animated track than use another layer (mesh) for the reflection. 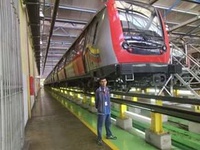