The A380 is a massive amazing plane. Long extended Wings and 3 ailerons to help the plane tilt its a wonder they ever got it to work. The Plane is I'd say nearly the size of a house. The best company to fly with is Emirates. First class u have the best privacy and the Lavatory is big, spacious and even has a shower. Dunno about the other company's tho. Also 2 complete floors. Downstairs Economy and Pre Economy and upstairs Pre Economy, First & Business classes. I think the A380s will be a replacement of the B747s in the near future. Also airbus made an interactive app on the iPad/iPhone etc, which is the concept plane. Looks great from checking it out but I don't think it will ever come into reality. You can share your experience here about the A380 if you've ever been on one. Looking forward to the comments.

Also looking on Flight Radar it's amazing the amount of planes in Europe compared to the rest of the world. From default map it looked like a clump all around Europe. Scary!

Erm, I have been inside and trust me a house is a little box of matches compared to that. It can accommodate 500 passengers...

Jokes aside it is a lovely plane especially when flying first class! Cannot wait till Virgin Atlantic get theirs

I have visited all the classes, even the bathrooms in the first class.

It a bit expensive, though.

@Derryck - yes, it can carry 500 passengers in massive comfort, yet it is certified for 864 passengers.

Around 2-3 am is a wave of 4-5 A380's from the Far and Middle East come to land at Heathrow. Probably pass over CZ

On our trip home to see family in 2010 we flew from Australia to the UK on a 747-400 and it was quite comfortable. With my wife and daughter we get three seats together and slept quite well. Qantas have updated their fleet so nice inflight entertainment etc.

Our return legs were in one of their A380s. Didn't start well when on taxiing they discovered a fault with a brake and we returned to the terminal to await the techs. They isolated the faulty set of brakes and the ones symmetrically opposite to avoid yaw. We a special clearance we departed just before 2am, so 3 hours later than expected. The trip was quiet so quiet that unlike a 747 with a constant drone you can hear a crisp packet crinkle a few rows away. Also the seats are more comfortable with a foot pocket under the seat in front that combined with your seats reclining makes even economy like an angled bed. The gap between the window seat and the bulkhead is too great allowing your pillow to constantly join the passenger's behind you feet. Qantas A380s have a larger screen and the inflight entertainment system is available for use the moment you turn it one. So with the 3 hour delay I had already watched a movie, they also have a tail cam. Also available is a self serve buffet in the rear of the plane and a monitored bar near the galley.

Performance wise I not so sure, we never made up a minute where as the 747 did on our way west? I have read complaints from Crews of 747s saying that the A380s cruise slower and hence force all that follow to do the same. Therefore making the other long haul flights cruise at a less than efficient speed. Ie the A380s are clogging up the skies, hence their greater capacity makes them at their slower speed even more beneficial as they stop the 747s operating at their most efficient. Hmm need a pilot to clear this one up, I'm no expert.

2011s trip home was a different one, one a A330-300 that had no trouble making up for lost time and the other three legs were once again 747s. Though we had a late departure from Heathrow our 747 did make up the lost time and some? Never been on a 777 and I have heard that these are a nicer way to fly than than 74s.

Stephen.
PS no trip home this year, but hope to make it next year to celebrate our 20th wedding anniversary.

777? That the dreamliner? I may get to fly on one of those to mexico as I think thomas cook use thompson flights?

Also a little piece of advice if you fly with thompson if you upgrade to premium your table is in arm rest so you can't fold up the arm rest to get a better sleep. Personally I'd stick with the standard seats.

The 787 is the flexi-wing plane - about 5 years late, as with many other projects

Stephen Cross wrote:Never been on a 777 and I have heard that these are a nicer way to fly than than 74s.

Been on 777s a few times many years back, since Singapore Airlines I believe is the largest operator of 777s (incidental the launch airline for the A380). Don't remember being on a 747 before, so I can't compare, but I certainly enjoyed the flight!

Unfortunately SQ also made the decision to replace their 747s with 380s, a terrible moves considering the number of faults on the Airbus. All 747s were retired from service April this year, managed to get a few photos of it during the airshow. 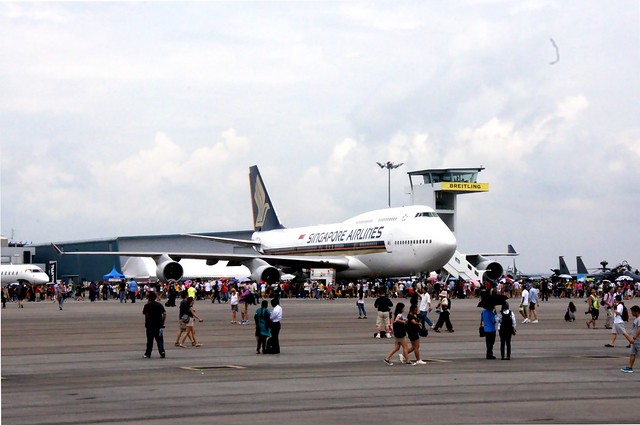 Singapore Airlines' B744 9V-SPQ on static display by Joey Foo, on Flickr

Anyone has any favorite airlines to go west from western Europe?

Hate to disappoint you Joey, but Singapore *only* have 59 active 777's, whereas Emirates have 112

Singapore were indeed the launch customer for the A380, and Emirates will have the largest fleet of them

hurricanemk1c wrote:Hate to disappoint you Joey, but Singapore *only* have 59 active 777's, whereas Emirates have 112

Singapore were indeed the launch customer for the A380, and Emirates will have the largest fleet of them

Quite possibly. I lost track of 777 deliveries - I think Emirates still have 3 on order, and have been getting them at around 1-2 a month for several years.

Singapore was one of the largest, definatly

You mean they're INSIDE! How unhygeinic, I'm not going on one of those.

Many of the ex. Soviet stuff had toliets downstairs. I think a few Western airliners did as well, but the under-floor area is generally used for cargo, fuel or crew rest areas