Sad to see Virgin go, never had a problem with them. But I wonder if FirstGroup will call their operations "First West Coast" or "Horizon Rail"...still do not know which sounds better.

However I reckon they might get those Hitachi intercity-express trains for the London - Glasgow link.

Acording to Railway Gazzete, they will likely be shortened versions of Pendolino's.

Sad to see Virgin disappear the service was always good never had any problem with them and looks like Richard Branson will not bid on any other rail companies which could mean the end of Virgin Trains for good.

It's going to feel strange in Carlisle we already have First Scotrail, First Transpennine Express and now First West Coast

IEP's are a possibilty - but it would be a 'last ditch' attempt or a follow-on order of the East Coast and Great Western.

That gives First group a monopoly between Preston and Glasgow (unless Northern go futher north via the WC and not Settle/Carlisle). But it might bring the sleepers into the main WC franchise

Is it worth having the IEP's with the pendolino's performing well.

As well as Blackpool, Telford, Shrewsbury and Bolton the settle-Carlisle line could become part of the First West Coast Franchise.

Virgin Should look at some of Northern routes because Northern have turned a blind eye on the Carlisle Newcastle route it is always busy but with only two carriages it is always overcrowded.

I though the Kelios/SNCF bid would have come above the first group bid. Somebody mentioned the North of Carlisle monopoly - they also now have two intercity franchises operating out of London - which we had been told some years ago couldn't happen because of competition protection?

But yes - it shows this government will put a devious yuppy who claims he can pay more money, and all of course using blue, and not red, trains.

In all probability First Group have overstretched their bid, which was predicated on a forecast of 0.3% economic growth at the time the bid was put together. However, that growth is not likely to materialise. In fact the economy is shrinking and a fall of 0.5% is a more likely scenario.
Investors reaction to the news resulted in a 6% fall in the Group's share price at close today. Not exactly exuding confidence.
It will be possibly years into the franchise before the reality becomes known. Of course, taxpayers will pick up the tab for whoever got it wrong in the event of a meltdown. Just as they had to for National Express and the East Coast fiasco.
NEVER trust a conservative with any sort of train set, they always break it.

and all of course using blue, and not red, trains.

Seems there is much more done wrong in the UK than here...

Seems there is much more done wrong in the UK than here...

It depends on what you define as "wrong". If putting public services in the clutches of private, profit motivated business, answerable to shareholders and underwritten by public guarantee is "right", then no wrong has been done. In the same way as "public/private partnerships" have shafted the health service.

That is where big business offers to "provide capital facilities", like hospital buildings, toll roads and so on, then they lease them back to the public service.
There have been several new hospitals built. Hooray!!! They will not be opening. Boooo!!! Because the health trusts cannot afford to pay to staff them after they have paid the private capital fat cats their lease money. Which they are forced to do for many years to come.

Can you see anything wrong with that?? Good for business, good for Cameron and his pals (all rich bas***ds). Davey's mate Georgie, Chancellor of the Exchequer, got a title coming, rich family, lands, estates. How far would you trust that lot?

Don't start me on what's wrong with UK. I was glad to get out of the place. Not that it made a lot of difference as far as having any money was concerned. Because the common, decent people of Ireland have been screwed by our own government, banks and greedy property developers all inextricably linked to dodgy deals and brown paper envelopes stuffed with wads of cash for political gain.

You cannot beat the system, it will beat you.

Shortened Pendolinos? They're alreadyd cramped and wedged solid on most peak time trains! Exactly the reason tehy're being extended to 11 cars now! What use willa 6 car train be when people can't fit on a 9 car train comfortably?

For goodness sake Jamie? What do you think the railways are for? To serve the public? Not since the days of privatisation mate. If they had been properly capitalised and modernised after the world war 2 run-down, then they could have been better run publicly. But of course there was years of neglect under conservative governments. Macmillan, Douglas-Home, Heath - none of them cared much. Transport Minister Marples made millions if not billions with his civil engineering and construction business, building ROADS!! And Thatcher would have happily scrapped the lot, if not for the asset stripping intentions of the greedy tory swine at the time.

Well, it depends on how one defines the parametres. The state can define much; the state is the client. If it wants, of course. And in the UK, assuming from what you say and what you said back in Michelle's boards, it doesn't. However, in Germany it does. In our public transport, it works; it got more reliable, it got cheaper. There are regions where it goes well and regions where it goes bad; and that is strictly correlating to how big competition was back when the franchise was decided on. Compare S-Bahn Berlin, a total disaster thanks to our former boss, Hartmut Mehdorn (who's doing exactly the same to Air Berlin with probably even more [negative] effect) to regions with higher competition. The cost of public transport dropped, because the competition pressure decreases costs more, than the interest rates of the companies push it back up; while the state remains in total control, defining exactly capacities, timetables, social and ecological standards; and, most important, penalties which can hit the companies very painfully if they don't keep to the contract.

Well put it this way - Cross Country who took over the cross country segment of VT back in '07 STILL haven't delivered their promises - infact, they did a semi-U turn with taking the shop out to add in more seats - they instead put in a Cycle rack instead...

It also took them WAY too long to introduce wifi - which they were actually contracted to do.

It's sad if Virgin leave altogether though - they were the only charm left in it really, which is odd as it was the Tories who introduced it and wanted to make it work - especially after they spent so long on a boycott campaign of British Rail in the late 80's so they could push privatisation through.

Somebody said somewhere - I think on the BBC - that you can't make the railways in this country profitable - and that's very true because franchising has been done so badly. The only exception had really been Chiltern Railways.

FTPX is a fairly reasonable franchise - but only because Kelios has a stake in it - and yet it's still too expensive to travel on for most passengers, compared to other services operating similar routes. Which is why I don't have much confidence in FWC - that and the guy who runs it just reminds me of Gus Hedges from 'Drop the dead donkey'...

It's Keolis. And railway operation, apart from intercity services, can't be profitable if it is done right, nowhere in the world. It can only be less costly. And that's what the german system is about - and achieves in most cases. And even for intercity service, the same system is considered from time to time. Why? Up till now, DB virtually have a monopole on those services. This way, it is profitable to keep up non-profitable lines, as they pay back by bringing passengers to the profitable ones. Now, however, private competitors are pushing into the market - however, they neither have the money nor the slightest will to uphold the feeder lines. Leaving the long-lived private InterConnex from Leipzig to Berlin aside, they concentrate on the most profitable line Cologne-Hamburg - and only profitable times, there. Now, if DB loses profits done there by either losing passengers to the competitor or by losing income by lowering ticket prices to the competition level - how are we gonna finance the feeder lines? It might be only a matter of time.

they also now have two intercity franchises operating out of London - which we had been told some years ago couldn't happen because of competition protection?

I think that First Group blew the Great Western franchise by not taking up the optional extension. And who wants GW when it gets upgraded? All those delays - just like the WC Modernisation Prog.

Actually, wouldn't it have been ironic if Virgin had decided to bid for it? I think the shortlisting for the new GW franchise which will start in July 2013 has already closed it's doors - but first group does have a bid in there. The other bidders are Arriva/DB, National Express, and Stagecoach.

I doubt NX will get it, the government probably won't want DB taking over another franchise plus it already runs Chiltern - my money on the next GWML franchise is either stagecoach or first. But it would have been more interesting if there had been a Virgin bid in there.

But back on topic - I think yesterday's decision can only lead to one thing - a lot of updates on Network West Midlands!

How, exactly, is it for your own good, and are you looking at First group as a whole or just the bad bits- apart from the overcrowding on First TPE (which we'll ignore because the DfT wouldn't let them have the planned 4th car) are you saying they're as bad as Thameslink? FGW seem to do quite well these days.

It's alright for you being in a large city- if you're north of the Manchester/Liverpool services, things aren't always as frequent, and you've flip-all chance of a cheap day in London.

Virgin swayed too much towards treating parts of the WCML as a high-class commuter run, without taking into account that long-distance travellers matter too.

Although, if you do go to Edinburgh, that's a fair old run powered by 5 diesel lumps. Under the Wires. A carbon footprint the size of Beardy's ego. 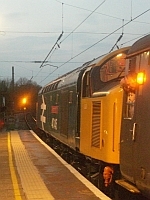 Ah, so revenue loss is OK because you want to film there, so I have to pay more for my ticket to subsidise that? Cheers Jeff!

No, but expecting me to subsidise it is. Barriered stations always used to issue platform tickets- is that not the case any more?